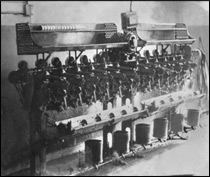 The edward j. RUBENS co., inc. was started as The Rubens Company in NYC in 1948 when Ed Rubens was 34. The company represented yarn mills as a commission agent.

In 1955, Ed decided to try his hand at converting and bought 3 winding machines and hired a part time winder. In 1959, after growth in converting and manufacturing, his wife Rose joined the company as office manager. In 1962 the company incorporated under the name edward j. RUBENS co.

Four years later, his son Dan, freshly out of college, joined the company (which now had 18 employees) in a sales capacity and then two years later as production manager.

In 1970, Ed unexpectedly died from a heart attack and Dan took over. Two years later the company acquired the Chenille Mfg. Co., that catered to the craft and floral industries. Within the next year they also acquired a yarn twisting operation and two chenille competitors which more than doubled the productive capacity.

In 2002, the company relocated to Ft. Lauderdale, Florida. In 2009 in order to continue to provide the excellent service our customers have become accustomed to and to more clearly identify what we do, we changed our name to Tagstring.Com Inc. In 2012 we relocated to Miami Beach, in 2015 moved to Fairfax, VA and in 2017 we moved to our current location in Chantilly, VA.